A woman wrapped up in grief, after the death of her twin brother on streets paved with injustice. The Sun, The Moon, and The Stars is an insider’s view into the personal aftermath of racial hatred which is so rarely considered in the current times. Baruwa-Etti’s writing places the audience in the heart of a race-motivated murder, a heart-wrenching warning against reducing these victims to their murders. In a world where everyone knows George Floyd and Breona Taylor for their deaths as opposed to their lives, this warning has never been more important.

Kibong Tanji is a mastermind of human emotion, never shying away from the ungraceful side of grief as she walks her character Femi through her brother Seun’s trial. From the unwillingness to leave bed and face the world, to the desperate wish to end it all, to the anger that drives her to threaten another. Femi is allowed to be both soft and harsh, vulnerable and terrifying. She dances with her brother’s memory minutes after wishing death upon others. She still has a life ongoing despite her grief and trauma. In such a short time she is shown to be beautifully, complicatedly human.

Tanji’s dynamic skill allows her to portray with ease a conversation between her character and others, but also the gripping loneliness that accompanies grief. The triggers of Femi’s trauma are devastatingly portrayed, an elegant demonstration of the complexity of grief and a credit to both writer and actor. This will resonate with anyone who has lost a part of themselves through the death of another. But it is never underemphasised that part of Femi’s grief is the burden that Black people are forced to bear, contrasted with the naivety that all the white characters hold. It is a necessary reminder in the cruelty of this world, written in a way that stays with you long after the curtain drops.

A solid 60 minute tour-de-force, some have said that Baruwa-Etti leaves too few moments to take a breath. But perhaps this is the point, dragging the audience behind Femi’s restless quest for justice and peace. It makes the final moments of the play all the more poignant, as harsh lighting fades into a breath-taking projection of stars. As Femi walks away into the depths of the stage, there is finally a contentment that perhaps she has found the peace she has fought for. 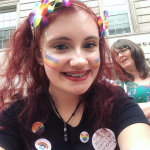