What do a rabbit and celery have in common? Nothing. Except for the fact that they are both the focus point of Claire Parry’s Intolerable Side Effects. The one-woman show is part of Bitesize Festival showcasing new talent, and award-winning performers at Riverside Studios.

A lot of hopping and scampering fill the hour in the big auditorium as the audience delves into the rabbit kingdom of Intolerable Side Effects. The play provides hilarious insight into the daily lives of the long-eared, fluffy animals. Through the eyes of Diane, the rabbit (not Diana!), Parry embarks on a journey detailing the ins and outs of a sexually active rabbit’s misfortunes. A visit to the rabbit’s sexual health clinic (GUM), and a prescription for the most dreaded form of contraception (Celery) mark the start of the show. A prickly pear, and a corrosive cucumber are offered as alternatives, however, the brave rabbit decides to fully embrace her intentions to not be with litter and chooses the celery. Equipped with a long list oftolerable and intolerable side-effects, Diane scampers home to take the first bite. Not long after she experiences what she had been warned of: mood swings, self-destructive habits, and overall unhappiness overwhelm the poor rabbit as she mustchew on her celery stick three times a day for the rest of her life.

But life on celery is not all that triste. On Diane’s side are the influencer Belinda Bunny who always knows just what to say, and Frenchman Gary from rabbit Tinder. And her life is brightened by the occasional song interlude that invites the audience to play a part in the rabbit’s life as background singers. But things take a turn for the worse when the celery unleashes its full power and causes a paralysis on Diane’s flirtatious date with Gary and forces her to return to the sexual health clinic once more.

Claire Parry’s rabbit-like movements and amusing facial expressions open the door to the secret world of hopping and humping bunnies while shedding much needed light on the crucial topic of contraception. Her demeanour, at first hardly accompanied by words, suggests a clown-like pantomime show as she wholeheartedly embraces the role of Diane the rabbit – furry chest and all. Diane’s high-pitched rabbit voice, whether melancholic or cheerful, becomes reassuringly familiar over the course of the hour-long play as we join her in the contraception revolution.

As clever as Parry’s idea is, and the all-encompassing stage design provides a clever depiction of what a modern rabbit’s burrow could look like, the story itself takes its time to pick up pace. Parry needs to gain trust in the audience’s ability to imagine Diane’s world and everything within it without having to show it – and slip out of the rabbit’s world to ensure that it is understood that a litter signifies a baby, and a cucumber cover a condom. Catchy showtunes, and hilarious clowning make Intolerable Side Effects a fun piece to ignite the contraception revolution in any fringe setting. 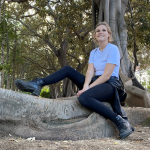